In 1962 the General Federated Women’s Club (GFWC), Garden Valley Syringa Club, sponsored a library. The Edgar Rae Post #121 of the American Legion, sold their old building to Syringa for $1.00. It had been an old CCC building moved from the Tye Creek campground into the city of Crouch. The library operated with donated books and books that were borrowed for a six-month period from the Idaho State Library.

In 1968, the Syringa Club’s Community Improvement Project was the library and its involvement with youth in the community. The Club won first place in the nation with this project. The money received from Shell Oil Company was eventually used as the community match for a grant adding a 600+ square foot addition onto the library in 1985. But back to our story…

In 1976 the Club petitioned Boise County to become a district in order to be able to receive country revenue sharing funds. During this time a two-story building from the Castle Mountain Subdivision was donated by Bill Cokerun, moved and remodeled using $3,000.00 of these revenue sharing funds. A sign with the library name was constructed by the inmates of the Idaho State Penitentiary and presented to the library in the late 1970s/early 1980s.

In 1980 the library received a grant of $1000 from the Southwestern Idaho Regional Library System. These funds were used to install shelving that was received from the Homedale Library. In late 1980 the residents of Garden Valley voted to make the library district a taxing district in order to collect funds to further develop library resources in the area. Larry Throngard furnished pipe and backhoe to get water to building for the sink and bathroom. At this time five community members became Trustees for the Library District and the library became a public library. The City of Crouch signed a five year lease with the Library District for the parcel of ground on which the library is currently located. A fifty-year lease was signed in 1983.

In 1985, with help from matching funds from the Syringa Club and area residents, a $5,000 grant through the State Library was received for adding on 600+ square feet to the library. This building resulted in the library being handicap accessible.

In the early 1990s a ramp and new front and back door were added, a door was placed between the two lower rooms in the old cabin, the stairwell was enclosed, and by the mid 1990s the library was painted blue. Yard work by both Girl and Boy Scout groups saw trees and flowers beautifying the area.

The library has undergone many changes including the development of a card catalog in 1983, the addition of an automated circulation system in 1994, and online catalog in 1998. Internet services were made available to patrons in 1994.

Use the search form below to search our catalog. 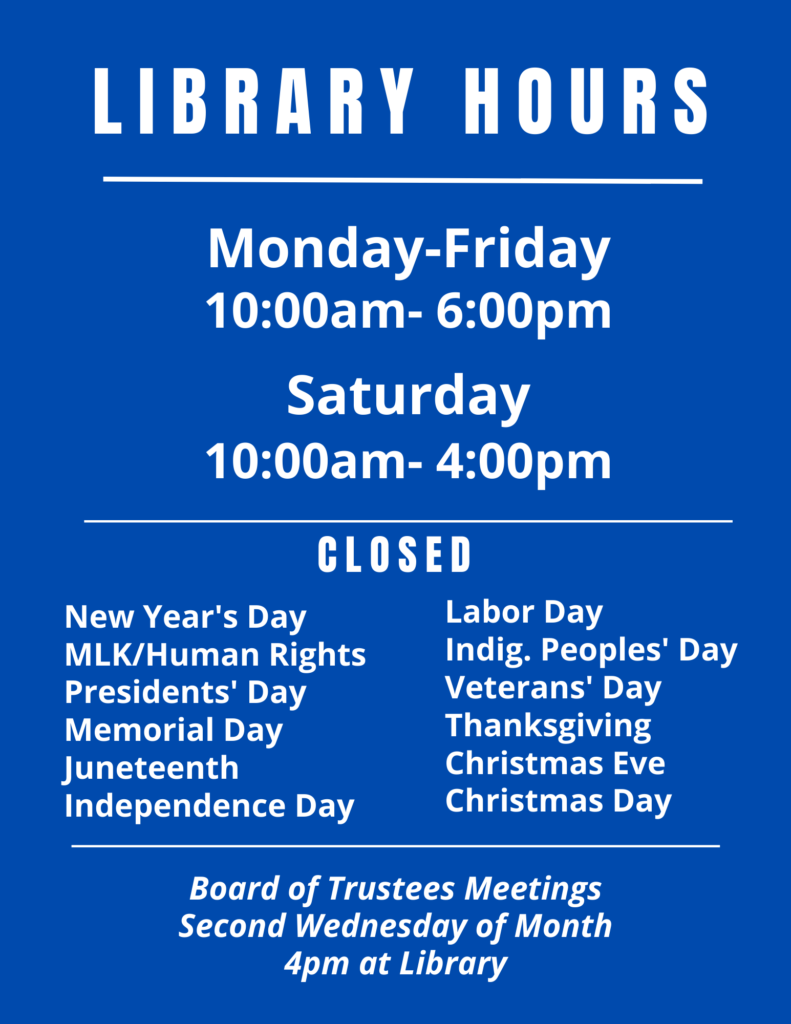 Use the search form below to search our catalog.

This website and program are brought to you by the Idaho Commission for Libraries and made possible, in part, by the Institute of Museum and Library Services (IMLS).